During the past twenty two years, Bromad Racing & the McGee family have continued to honour the memory of Brody’s father (Dean Fraser) through this memorial race in their former home state of Tasmania. Last Tasmanian race 19/02/2017. But now that the family reside in Queensland and with the ever increasing costs of travel across the water to compete in the event annually, the family with the support of the Tasmanian speedway community have relocated this wonderful event to their new home track, Hi-Tec Oils Speedway in Toowoomba and to the Production Sedan division which the McGee’s currently race…Towoomba Speedway

“Titch” was a stalwart of the Tasmanian Formula 500 Club. He was a man that loved the sport and the drivers. “Titch” was a driver, President, Chief Steward, Scrutineer and most of all a friend to all and would help anyone who required his assistance. He was a driving force behind the bid to save Carrick Speedway and was also a promoter of the track. A true gentleman of the sport and missed by all.
Ken was a truly respected member of the Tasmanian Formula 500 Club and a huge contributor to Carrick Speedway behind the scenes. Ken’s son Tim has carried on the family tradition being involved in most racing divisions and on the management of Carrick Speedway.
Des Redburn and the Redburn family have been around since the start. Des’ involvement as both a driver and club member will be always remembered. He was there to build the first ever clubrooms/bar in York Street, fighting through court when they wanted Carrick closed, through to running the pit canteen. A respected and missed member of the Carrick Speedway family.
Geoff was heavily involved in speedway from its beginning in the 1960s until the late nineties. He was best known as the voice of speedway in Tasmania but also as a promoter of Carrick in its very early years.
Geoff’s first love was Super Sedans and he was one of the early car owners to have someone else as the driver. The grandstand on the back straight is named in his honour and when told of this prior to death he was very proud and humbled about being recognised in such a way.
Geoff retired from commentary the year before he was diagnosed with Leukaemia and passed away a short time later. 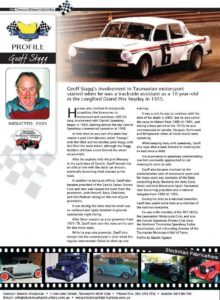 Ken was a great lover of speedway and enjoyed being a part of the speedway family! He certainly didn’t have the fastest car or the best bits in or on it, however he always turned up on race day giving 110% to the class and it’s drivers! “There is a lot of family history at the speedway and memories and stories to be told!” Matt Tatnell said.
Mark began his AMCA Nationals racing career in 2003 after many years as a spectator. Not content with buying a car, Mark built his car at home in his shed. He raced as part of a team for the first two seasons and then went it alone.

Mark raced for four seasons all up until the purchase of a business, which consumed a lot of time and made it too difficult to continue with his racing. Mark was diagnosed with terminal pancreatic cancer in August 2015 and was given a life expectancy of three months.

Because of Mark’s fighting spirit and determination to stay with his wife Karen, he survived 9 months from diagnosis. AMCA Nationals Tasmania is proud to present the Mark Triffett Memorial Race.

“We were thrilled when the Wingless competitors contacted us and started the ball rolling,” said Greg Pinkard from the Launceston branch of the Make a Wish Foundation.

“It is an incredible honour to be chosen as the recipient of the inaugural event and we hope it continues for a long time to come.”